skip to main | skip to sidebar

We made cider again!

A new source of apples

As my time at Cardiff University came to an end, conversation in the office drifted from the usual high focus on work to my next job, my home office, and the home pub I'm building in my garage. More of that later, but for now, the general gist is: I'm building a pub, and would ideally be serving homemade beverages from the hand pump I have in there.

On the topic of previous brewing attempts, I mentioned my previous successes of making cider (read more here) from apples picked from my Grandad's tree when he lived on the Isle of Wight.

Rosemary mentioned that this year is a particularly good year for apples, as witnessed by the huge quantity of apples on her mums trees in Penarth. She sent me some photos of the trees, and we had many guesses at what type they may be. We're still not sure, but they all seem to be different. Also there are some pears, again I've no idea what type. 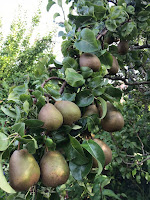 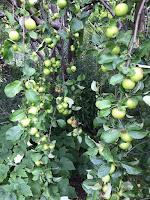 We were very lucky, and Rosemary's mother was incredibly generous, and we were offered the chance to go over there and grab a whole load of them! We had fun shaking the trees, and Rosemary's children had fun trying to catch the apples in baskets held over their heads. 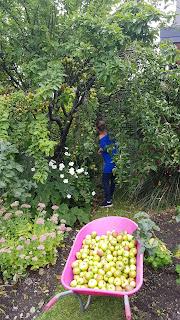 So many apples! One wheelbarrow load. About 44kg in all, or one very large suitcase full. 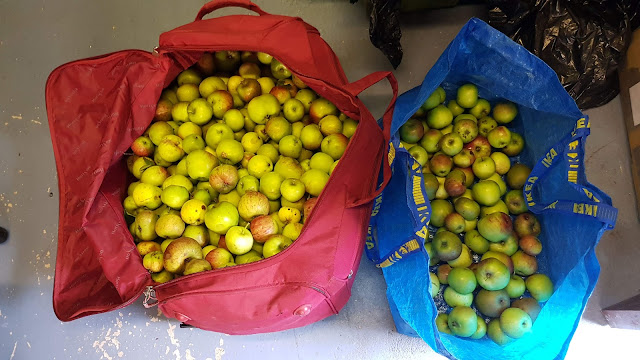 Once home, we watched rugby and looked at the apples. The plan was to actually do something with them that afternoon, but we were tired. 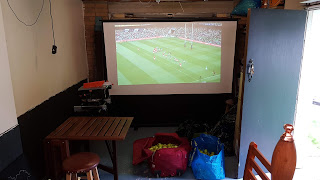 I read online that if you're not going to use apples straight away then you should space them out so the rotten bits don't touch. Bonus, it allowed for this photo. 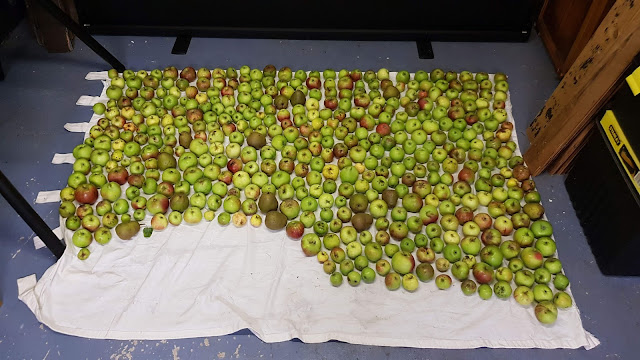 After a trip to the St Fagans food festival, and then B&Q, I collected together the parts from the last time we did this, along with a new threaded rod nut/bolt mechanism to replace the car jack we used last time.

To recap, big bucket for mashing up apples. Closed barrel for the fermenting. Various cutting tools for turning apples into small bits of apples.

Also, the cider press frame and the plant pot. The big beam of wood will have multiple functions. 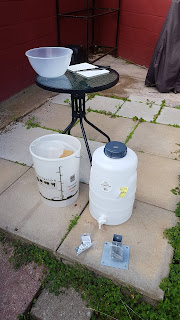 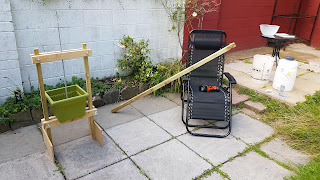 Get on with it.

Ok, so now to actually do something. First, I cut the post into a few sections. A short bit to fit into the post holder/stand. I drilled a 14mm hole about 10cm into it so the threaded bar would locate properly. The photo below shows the hole and the stand. The next photo shows the end result, the threaded bar down the middle of the press, forcing the stand down, and pushing up on another section cut off of the long beam. 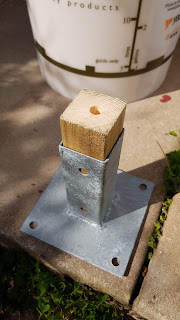 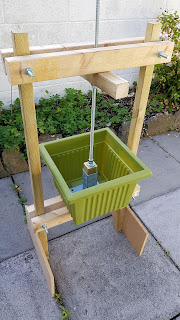 This photo shows the nuts on the threaded bar, with a whole bunch of washers of increasing size to spread the load on the new cross beam. On the other end of the beam, more nuts and multiple washers pushing down into the short section of beam. The locating hole keeps the bar in place, but the main force is via the nut down onto the washers and into the top of the beam. 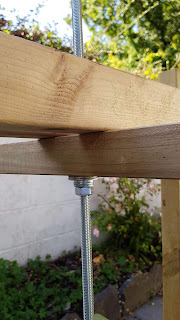 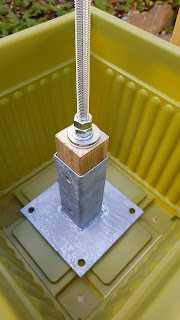 Everything in place, and a spanner on the nut at the top. This photo doesn't have any apples in it yet, and it was already 4pm. Also shown, a big beam in a bucket. 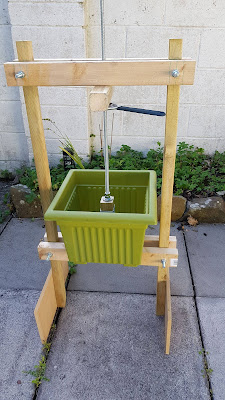 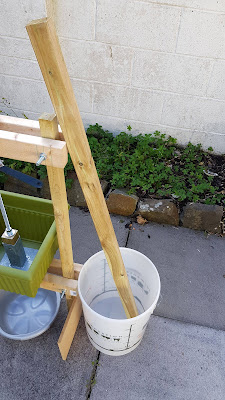 So, are we going to make cider today?

Not yet, I have to clean the buckets and stuff. Fun fun. 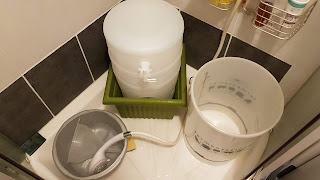 Ok, so now the apples?

Yes! Well, some of them. Maybe 1/4 of them, chopped up and bad bits thrown out. Sitting in the sun and chopping apples is nice. 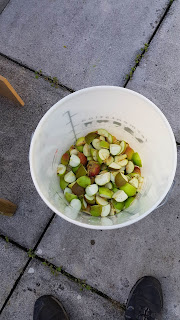 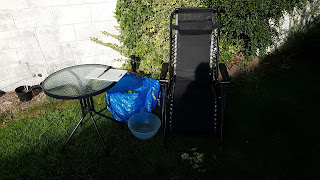 After smashing the chopped apples up with the wooden beam, they look far less appetising, but they are releasing a load of juice. This was surprisingly easy to do, the weight of the beam does most of the work, and just 5-10 mins of smashing produces a mash which is ready to be squeezed. 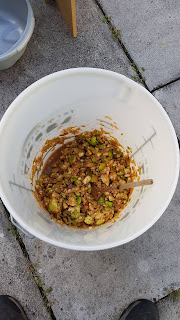 Moving the mash into a bag, juice was already running into the bucket, 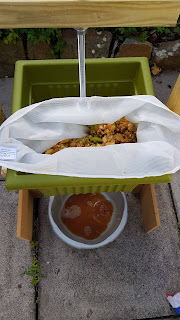 It worked! In small batches and after a bit of squishing by hand, the last bit of the squeezing with the press was really effective. We ended up with more juice by volume than remaining apples bits. 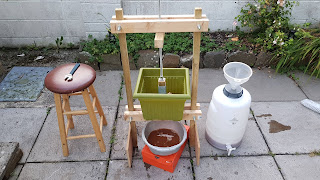 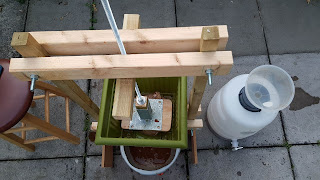 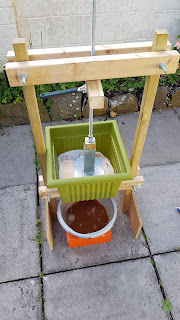 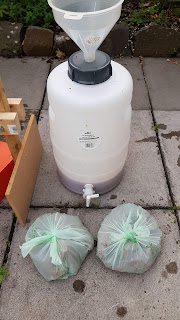 Just over 5 litres of it, with barely any of the apples used. 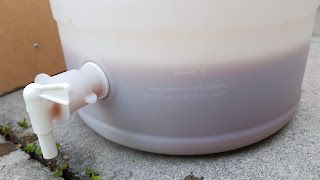 Lets see the before and after of apples used. 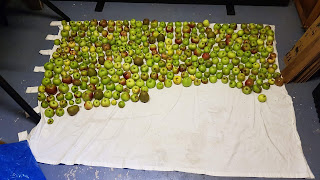 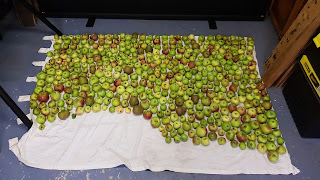 So, in the next part, I'll keep working on the apples until they're all juiced and ready to start fermenting.